Christopher Buxton » Uncategorized » Are You –Phile or –Phobe? That is the Bulgarian defining question.

Are You –Phile or –Phobe? That is the Bulgarian defining question.

Let us imagine that back in the seventies I had two pupils who shared a desk – Ruska Filova and Rilka Russofobska. Ruska Filova studied Bulgarian philology at University and came to appreciate the superiority of the Slavic soul. Inflamed by her love of Russian culture, she became a teacher in a provincial town. She now endures low pay and complains that her pupils no longer behave. Rilka Russofobska studied English philology and now lives and works in the big city. They are both my friends on Facebook, and both now are engaged in a relentless war of words. Their sniping is reflected in myriad exchanges and shares by their similarly divided compatriots. Ruska Filova writes in capital letters. Rilka Russofobska relies more on patronising wit. As recipients of an exceptional education, both base all their positions on “incontrovertible facts”.
To understand these positions, we have to examine the narratives that lie behind them. Ruska Filova repeats the narrative she learnt at school in the 1970s. Bulgaria – the oldest civilization in the world – was doomed to fall under the “Ottoman yoke” for 500 horrible years. They were rescued from barbaric slavery and “genocide” by the heroic self-sacrifice of the Russians. And in 1944, Russia again had to step in to rescue Bulgaria from an oppressive pro German “fascist” government and usher in a period of socialist stability with jobs for all, free health care and education, and pensions that guaranteed dignity in old age. Imprinted on her memory is the poster of Brezhnev clasping the Bulgarian premier Zhivkov in his arms 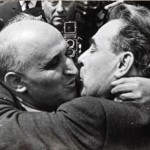 Some thoughts on Poetry in translation provoked by an exciting new development the publication of translations of two contemporary American poets into Bulgarian by Rumyana Emanuilidu’s Znatsi.
Jochan Devletyan