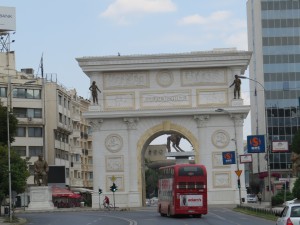 We were waved to the side of the road by police motorcyclists on our way back through Macedonia towards the Bulgaria border.  Thirty seconds later a cavalcade of black windowed limousines sped past, bearing as we learnt later, the Macedonian Prime Minister and his entourage to a meeting with his Bulgarian counterpart in Kyustendil.  According to press releases, the Macedonians were seeking Bulgaria’s support for their entry into the EU.  In return the newly installed Bulgarian Prime Minister’s counter-demand was as modest and unassuming as his curiously uncharismatic character. Rather than complain about the violent persecution of those Macedonian citizens who have the effrontery to claim Bulgarian ethnicity, he simply wanted Bulgarians and Macedonians to celebrate their joint heroes together in a spirit of mutual respect, allowing for the extraordinary historical distortions that have taken place over the last 70 years.

It’s difficult to imagine what form such celebrations might take.  It might stick in Bulgarian throats to be told that ‘Macedonian” Nikola Vaptsarov’s tragic fate was not that he was executed as a Communist terrorist by the bloody fascist Bulgarians but that he was forced to write his poetry in the language of the oppressor rather than the beautiful Macedonian that was his birthright. Ке бда стар; ке бда множко стар – doesn’t that sound so much better?

How about a celebration of Tsar Samuil’s battles against Bulgarians and Greeks from his Turkish fortress in Ohrid?

Skopje is now a sight to behold with its French style arc de triumph, its London-style buses, its gigantic statues of Alexander and Philip of Macedon, Justinian and Tsar Samuil, and its museums chronicling Turkish, Bulgarian and Communist oppression.  Any patriotic Macedonian will feel history on his side as he spits at his Bulgarian neighbour and kicks any fellow citizen who claims the language he speaks is in fact Bulgarian.

Meanwhile travelling westwards from Skopje the mosques grow larger in every village and Albanian flags flutter in the breeze. Extreme nationalism begets extreme nationalism. Macedonians as they build their extraordinary Skopje theme park seem to be blissfully unaware of this.

Once in Albania, the flags disappear.  The mosques are modest and there are many churches. The casual traveler gets the impression that here priorities are quite different than those in Macedonia. No time for artificial patriotism, this is a people who want to catch up with the modern world. They are working hard on infrastructure. Their attitude to foreign tourists is extremely welcoming.Compared to their Adriatic neighbours they seem genuinely thrilled to see you and do their utmost to ensure you want to come back. 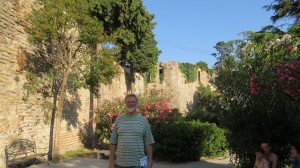