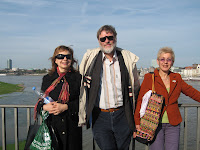 Sometimes – usually on a German autobahn when our next destination seems to have picked up its skirts and taken precipitous flight – I swear we will never do this again. And yet our every car journey across the continent throws up so many wondrous surprises, that perhaps as with pregnancy we forget the toil and pain.

Four days in Germany! – with great hospitality from Professor Tanya Kouteva in Dusseldorf and my cousin Peter and wife Pauline in a village just outside Munich. In Dusseldorf we walked for miles, getting lost in the parks, then re-orientating ourselves along the river Rhine. It is a gracious c

ity of tall ornate buildings and we want to visit again. Down south in Bavaria Peter had only just seen off his brother’s defeated golf team. We had a great day in Munich and Oberpframmen – the highlight being Pauline’s steamed white asparagus in mustard sauce.

Back on the road, we shot through Austria. Years ago, the journey beyond the Austrian frontier had seemed to turn our car into a wagon fit for the rutted paths of the wild west. But the only reminder of those heady white knuckle days was the motel we stopped in near Szolnik. You enter through a gate surmounted by buffalo horns and crunch through a cactus garden ringed by wooden cabins that would not look out of place in Tombstone Arizona. The reception clerk is suitably sinister and monosyllabic, as if eyeing us up for the role of victims in a latest Eastern European slasher movie.

Hurra for Romania, whose arterial roads seem to have improved since our last visit. The only problem is the third world dereliction we encounter as transit drivers routed round large cities.

Oradea provides a brutal introduction as we crawl along deeply potholed roads past those mysterious conglomerations of rusty pipes, gutted buildings and abandoned burnt out machinery that is Communism’s least pleasant legacy.

But away from the urban transit routes Romania is beautiful and we head out for first the Transylvanian Alps and then the mighty Carpathians. We stop just beyond Sibiu in a village full of large families and children and what is most striking, people look relatively prosperous. Roma and Romanian living as neighbours, their children playing together.

I would like to challenge the mayor of Bucharest to get in a car driven by naive innocent foreigners who wish to drive through Bucharest for the first time. In order to facilitate the learning priocess, the mayor must agree to have his mouth taped and his hands pinned, so he will be as completely dependent on the road signs as his hapless guests. We lose three hours navigating around this city once described as the Paris of the east.

Constanza is a more elegant city than either Varna or Burgas but compared to the Bulgarian port cities there seems little in the way of new building. Down the coast we drive through unspoilt seaside villages with views of the sea unhampered by Las Vegas Mutra baroque. The bad news is that the Bulgarian Watermelon Brothers have now secured a contract to develop part of it.

But once across the frontier into Mother Bulgaria, it is not long before we are made aware of the works of the Watermelon Brothers and their ilk. Every hundred yards a wayside billboard warns us of new holiday developments that threaten the destruction of Bulgaria’s most precious resource. What Professor David Jenkins of Plovdiv has described as a Black Sea Megalopolis that will stretch from Balchik Tsarevo and on to the Turkish border, where the vast herds of dazzled, frazzled tourists will teeter in and totter on, on their seven-day, all-inclusive holidays, snapping their fingers to a stageful of heavy metal groups and chugging beer by the tons-full.