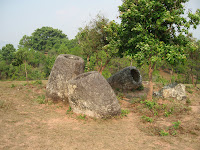 The cylindrical stone jars point in every direction from hilltop and plain. They have sat buried the dry ground for over two thousand years. They look like guns or base organ pipes. But their mouths are muted. They sit scarcely stirred by the earth crunching bombs that fell around them from 1964 to 1973.

Across the Plain of Jars there are still thousands of unexploded devices that will take a life, a leg or an arm – all dropped by the Americans in a war that was never declared or acknowledged.

The villagers use bomb casings for fences and house support. But the children pick up the little bomb-lettes spread by cluster bombs. The boys have been told that when they explode there are valuable ball bearings for their catapults. Often it is too late before they understand the terrible price for their ammunition.

Across the Plain of Jars there are efforts to clear the area of mines, bombs and bomb-lettes. The whole job is reckoned to take four generations. 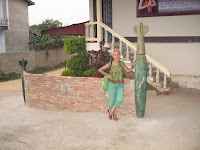