Notes towards an aquamarine future- News from New Zealand and Bulgaria 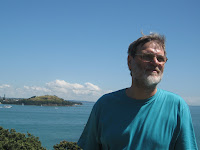 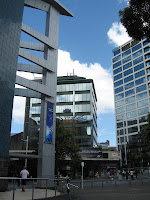 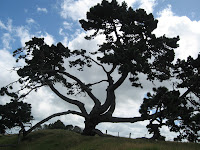 Our ears are becoming attuned to the Kiwi accent. Like chords in a key change, vowels just move one sound over. Bat becomes bet; bet becomes bit; bit becomes but; but becomes bat. In the museum the guide explains how a new pist introduced by the Maoris ate the eggs of the flightless bird population in . Annie (Ennie in Kiwi) is shocked and wants to know more about this pist. “What’s a ret?” she asks. The guide is lost for words – a European who doesn’t know what a ret is. I say the problem is that the Maoris didn’t bring any cets.

The sky is an intense blue and at the crest of every hill in Auckland you look down to see a faithfully reflecting sea that fills the vast bay of volcanic islands, moulded into green dough cones and darkening into the distance.

Even the air tastes of aquamarine. It blows into the faces of underdressed Kiwis who stride beneath cool blue skyscrapers towards their next peak, like stars in their own health advertisement.

I have never been so aware of trees. Mossy green boughs are flung outwards to provide a child’s climbing dream. Branches twist and curl beyond the scope of the widest angle lens. Then the palms explode from their centre like showering fireworks. Slender maidens with trembling branches just budding, extend their as yet leafless fingers to flirt with the blue sky. Ancient neighbours in dark green leaf bow beneath the weight of a heavy bearded lecherous parasite that sweeps the air like besom.

Meanwhile the news from is for once unexpectedly good. In the latest court case the demolition order hanging over Milka’s property in Vuzrazhdane 4 has been lifted – at least for the time being. At this announcement from the judges, our champion, Assen Yordanov let out such a triumphant whoop that he received a warning from the court.

Further whooping energy went into the making of a TV documentary. Milka now looks on Assen as the Bulgarian Martin Luther King.

None of the above changes the ground reality of the unnecessary conflict we find ourselves in with the third richest man in . Even though Milka’s rent from at least one part of the property is secured, the other tenants have been scared/bought off. We hope at least that Gravé’s case for compensation has now been compromised.

Mitko Subev – we are always ready to negotiate.