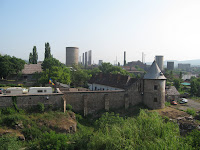 To Romania – where unlike Bulgaria very little is being rebuilt. Town centres contain baroque and art nouveau buildings alongside crumbling panel blocks. Even the capital Bucharest features few of the post modernist developments that obscure the views of Vitosha and crowd the once empty spaces in Sofia. But as in Bulgaria remains of Communist dereliction are ubiquitous and are often in such close proximity to historic sites that a sense of wonder is often tinged with that necessary melancholy that should accompany a moment of beauty.

On town outskirts, shopping outlets and new shiny factories sit side by side with the all too visible communist heritage of stark deserted hulks. Here a smart cut lawn fronts the glass frontage of an aspiring electronics firm. There a heap of rusting pipes in a dusty yard draws the eyes to the graffitied off white walls and smashed windows of yet another derelict communist workplace. All this machinery –what was it for? All these distorted chimneys – what did they disgorge into the air? And the piping, that goes on for miles, and even surrounds towns like a weird dystopian defense system – what is its purpose now?

But let’s go and see something historic! Hunedoara contains what our guidebook describes as the finest castle in Romania – once the home of Janos Hunyadi, national hero in both Romania and Hungary, victor over the Turks at the battle of Belgrade.

We approach a town that looks like a cross between Pernik and Kremikovtsi. – a dusty landscape of strange shaped ovens, soaring chimneys, rusting dinosaur machinery, and blank grey walls of long deserted buildings. The whole town is an industrial zone – it must have been once Communism’s pride and joy – a paradise where there would always be work for everyone. One can almost see Ceausescu waving his hand to ecstatic crowds amid the now forlorn residential blocks. Was there a reason for surrounding this historic site with such ugliness? No doubt Ceausescu could point to how far Romania has evolved from medieval tyranny!

For lurking behind the factories which now provide little or no work is the Hunyadi castle – the end point of our excursion away from main route to Bulgaria. Set into a steep valley beyond one of the steel works, the outer walls rise sheer into the sky from a chattering stream below. Crane your neck and marvel at the conical towers that decorate the sky like ladies’ hats from a courtly romance.

You enter the castle over a high draw bridge. At the gate you have yet another chance to look back and compare the two worlds. Once those chimneys would have been belching smoke. Turn back and walk into the courtyard. An ornate stone staircase leads to a renaissance upper hall. This was built to specifications laid down by Bethlen Gabor – another Romanian national hero with a suspiciously Hungarian sounding name.

We practically have the whole castle to ourselves.

Well this was true compensation for the hot delays , sitting at the wheel in queues – once for a whole hour outside Sebes where we moved a hundred yards every ten minutes. Romania like Bulgaria is a country of staggering beauty even though you have sometimes to keep one eye closed.

So let’s look at Razgrad – we’re passing by there anyway. There’s a historic mosque and substantial remains of a Roman town. The centre of Razgrad looks uncared for. The few older buildings are unrestored and flaking. The Mosque is closed. Its windows are broken. The Odessa style steps – probably built under the aegis of Liudmilla Zhivkova – lead to a monstrous Balkan Tourist hotel, and are now sprouting weeds. There are no signs for Abritus – the ancient site – and we have to ask for directions. It’s just by the factory – you can’t miss it. 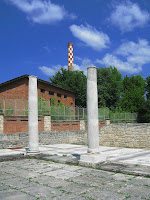 nd the factory, site and the museum shaded by trees just off the main road to Shumen.

The Roman gateway and part of the wall have been crudely restored with cement blocks to give a sufficient idea of the scale of the original town. But in 1956 a pharmaceutical factory was built and this occupies most of the centre of the site. You have to skirt round its entrance to reach the Roman forum, where columns stand in competition with the factory’s chimneys. Close one eye and you might be in Greece, Turkey or Rome.

The museum contains far more than it is able to display in its one room. Funds are promised for fitting exhibition space and appropriate security. There are no funds for further archaeological excavations of a site which predates Roman occupation but has to suffer a factory eyesore that no longer provides work for the town.